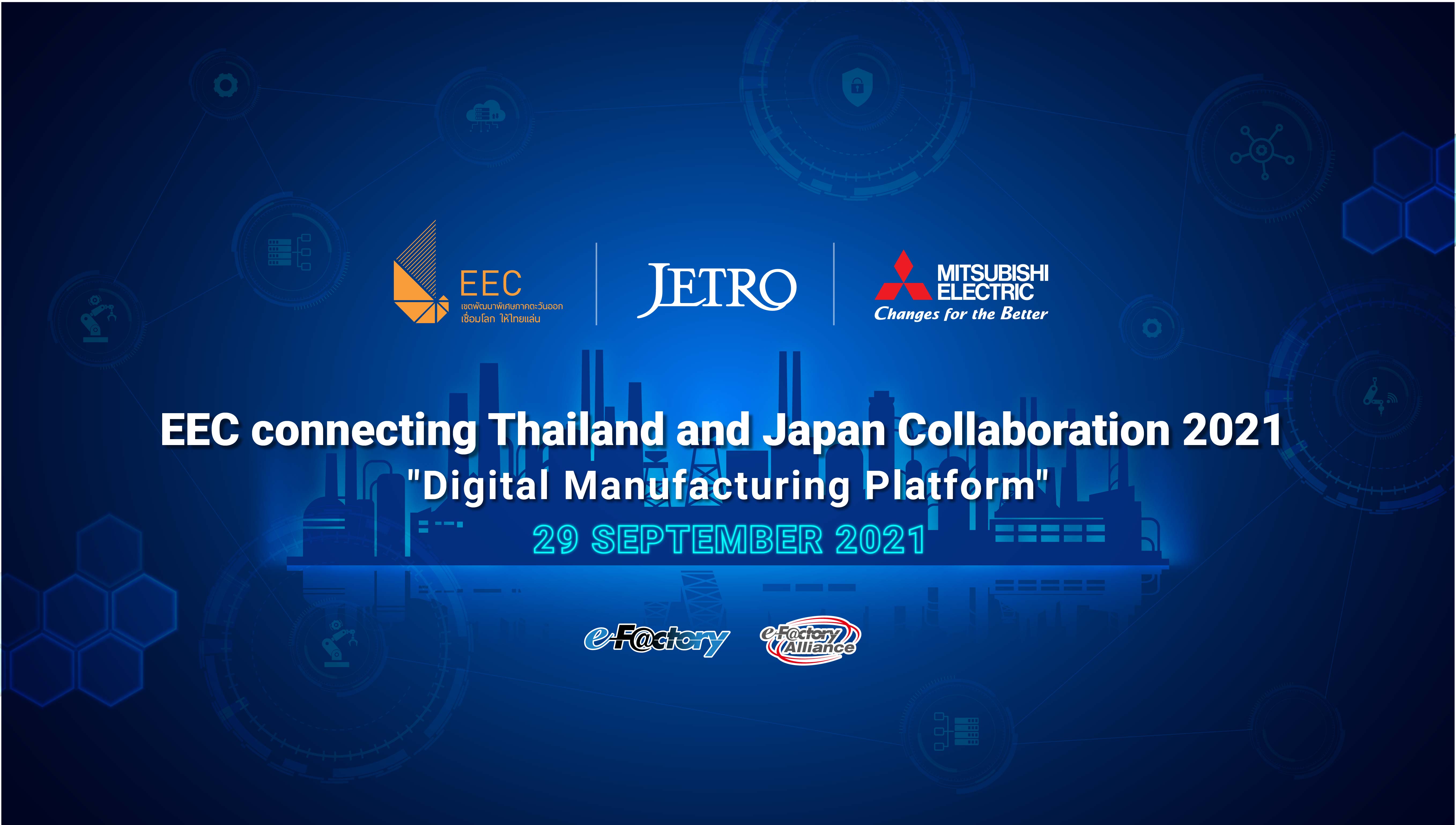 September 29, 2021 - Mitsubishi Electric Factory Automation (Thailand) with EEC and network partners joining with The Japan External Trade Organization (JETRO) held a press conference to drive industry in the Eastern Economic Corridor (EEC) to continue using the ecosystem to support the creation of solutions using the e-F@ctory concept to enhance knowledge for personnel through the EEC Automation Park, connecting with the e-F@ctory Alliance in Thailand and abroad to meet the needs of developing industrial production processes that will reduce costs, add value, and increase labor skills to lead to Industry 4.0 appropriately and cost-effectively to investment. Currently, there are more than 58 company partners in every industry.

Dr. Kanit Sangsubhan, Secretary General of the Eastern Economic Corridor Office of Thailand (EEC) said that “The cooperation between Thailand and Japan to drive usage of automation to develop Smart Factory in Thailand, led by Mitsubishi Electric Factory Automation, which initiated the e-F@ctory Alliance concept, together with network alliances to jointly develop the EEC Automation Park on Burapha University to be the main base for driving the application of Robotics & Automation for productivity industry, reduce production costs, and attract new investments in the new S-Curve target industries, such as 5G, Digital, Smart Factory, Data Center, Cloud Services, Digital Platforms, which are expected in the next 3 years to invest up to 500 billion baht, an investment in the EEC area of ​​not less than 50 billion baht. baht/year by 2022, set a target for factories in the EEC to prepare for system design surveys and connected to at least 200 sources of capital and set a goal within 5 years to be able to adapt to smart factories that use high technology, digital manufacturing, not less than 10,000 factories, upgrading the Thai industrial sector to increase competitiveness in the global market, raising the income of Thai workers, improve the quality of life in a balanced and sustainable way.”

Mr. Atsushi Taketani, President of JETRO Bangkok revealed about the cooperation between the Thai government and the private sector of Japan, "In the part of JETRO, the project "JETRO Robot Automation Project" has been set a special website up to introduce Japanese companies, who is a leader in the robotics and automation industry, which has applied digital technology along with human resource development, webinars, and business meetings. As for the cooperation between the Japanese and Thai governments, the project "LIPE (Lean IoT Plant management & Execution)" has been launched since last year. And in addition, there is also support for Thailand's industrial sector through the public and private sectors through the cooperation between JETRO and EEC in automation and robotics, with the EEC Automation Park located in the EEC area as an important cooperation. Mitsubishi Electric, a Japanese company with cutting-edge technology, has extensive knowledge and experience in factory automation. This is extremely important for the future of the economies of both countries. The technology and knowledge of Japan will be distributed to Thailand. We sincerely hope that EEC Automation Park will be able to promote and drive the adoption of factory automation and productivity in Thailand.” 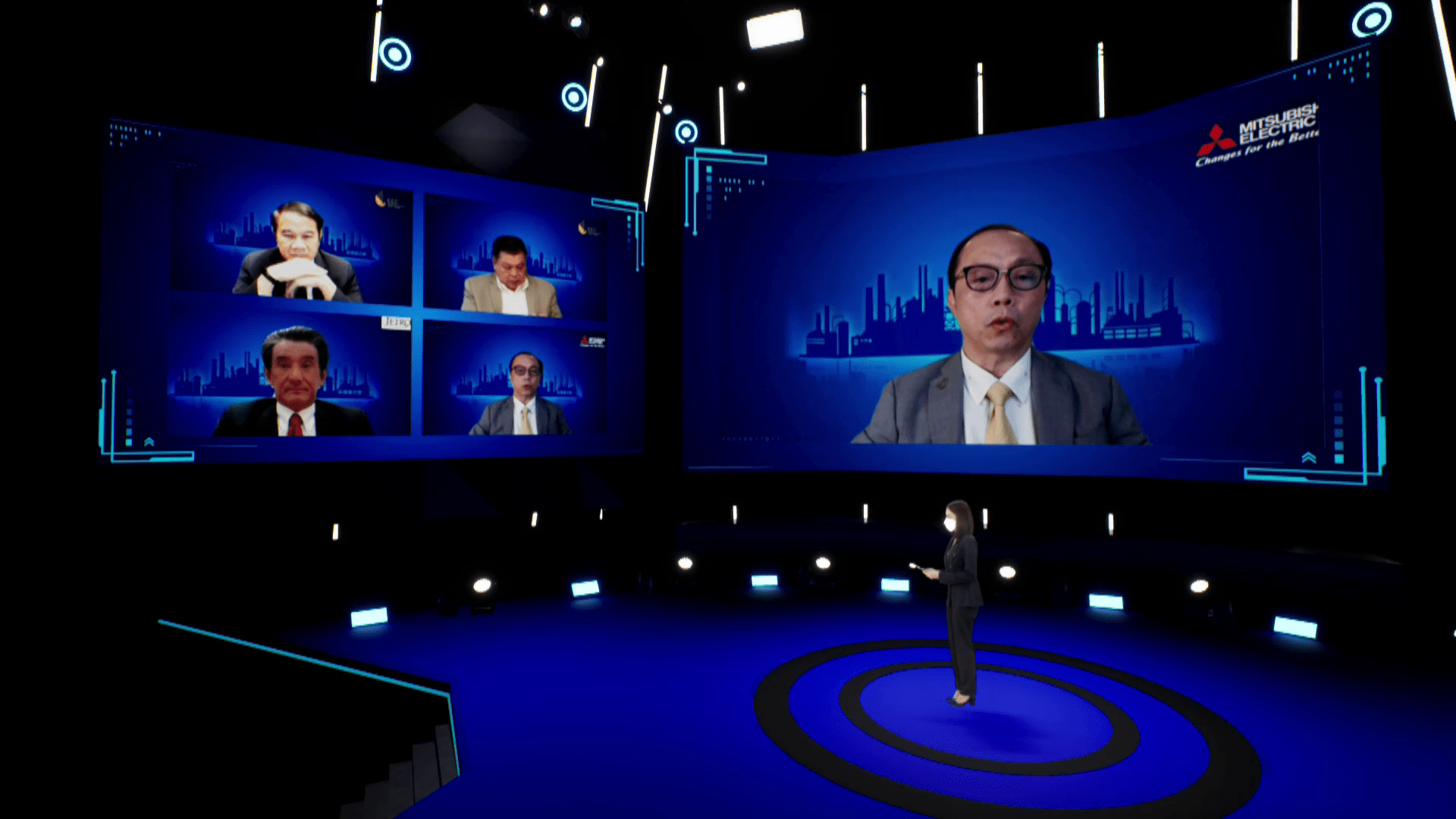 For the part of Mitsubishi Electric Factory Automation (Thailand) Co., Ltd. Mr. Wichiene Ngamsukasemsri The Managing Director revealed, “The Company has introduced an intelligent production line system or e-F@ctory to support and drive the development of the industry by using advanced innovations in Thailand. We believe that the key success for upgrading Thai industry to Industry 4.0 consists of 3 main gears: 1. Machine Automation 2. Digital Engineering and 3. Human Knowledge. With the collaboration with the private sector, the public sector, including the education sector has achieved a certain level of goal at EEC Automation Park and ready to build on its success further by building an ecosystem to enable the adoption of various technologies in the Thai industrial sector and it will be a first step for leading the Thai industry to fully develop the Digital Manufacturing Platform to meet the changes in the digital era and also a reinforcement for government policies, especially the EEC, in building personnel to support the 10S Curve plus and another 2S Curve for Thailand."

Dr. Apichart Thongyu, Chairman of a Working Committee of the Eastern Economic Corridor Human Development Center (EEC-HDC) said about personnel development topic that “EEC-HDC works with 8 universities, 40 vocational colleges in the EEC area and 20 universities outside the district of EEC, aiming to produce automation personnel based on structures related to industries, including digital, robotics, smart electronics, automotive, and logistics which is required according to the investment plan in the EEC in 5 years. Throughout the past 2 years, we have cooperated with Mitsubishi Electric and its partner network to build a base of knowledge, understanding, and skills to enhance personnel's potential in this field through cooperation with the EEC Automation Park at Burapha University and automation learning centers in vocational colleges both public and private concurrently. We produced a total of over 40,000 personnel with 133 courses related to personnel development in short-term training courses that have been registered linking with entrepreneurs and various industrial groups in the EEC more than 130 companies.”

In addition, EEC Automation Park also participates in the development of personnel to have skills in Robotics and Automation through the mechanism driven by EEC-HDC, the EEC Net network center and promoting skills qualification according to international standards (Skill Qualification) for labor productivity or higher labor productivity with international standards cause more income. This will be the key to investment from investors around the world. Setting a target of at least 2,000 people / year or 15,000 people within 5 years.

Dr. Paiboon Limpitipanich, Director of EEC Automation Park said, “EEC Automation Park is a network center for automation, robotics, and digital, to drive industrial development towards smart factory and also be a training center to develop skills for personnel entering the industry more than 25 courses, including providing hardware and software information in the form of Business Matching using products from the company in the alliance in order to make it possible to use in industrial development. Including consulting services to improve production for the industrial sector, financing, and industrial sandbox services to develop product prototypes through cooperation with various project partners related in the EEC area especially Thailand Digital Valley from DEPA and EECi/SMC from NECTEC to support activities with industry in pre-commercial trials. By November 15, 2021. EEC Automation Park will be opened to people who are interested to visit. Hoping that this EEC Automation Park will help to move the country forward to change the industry according to government policies and objectives. 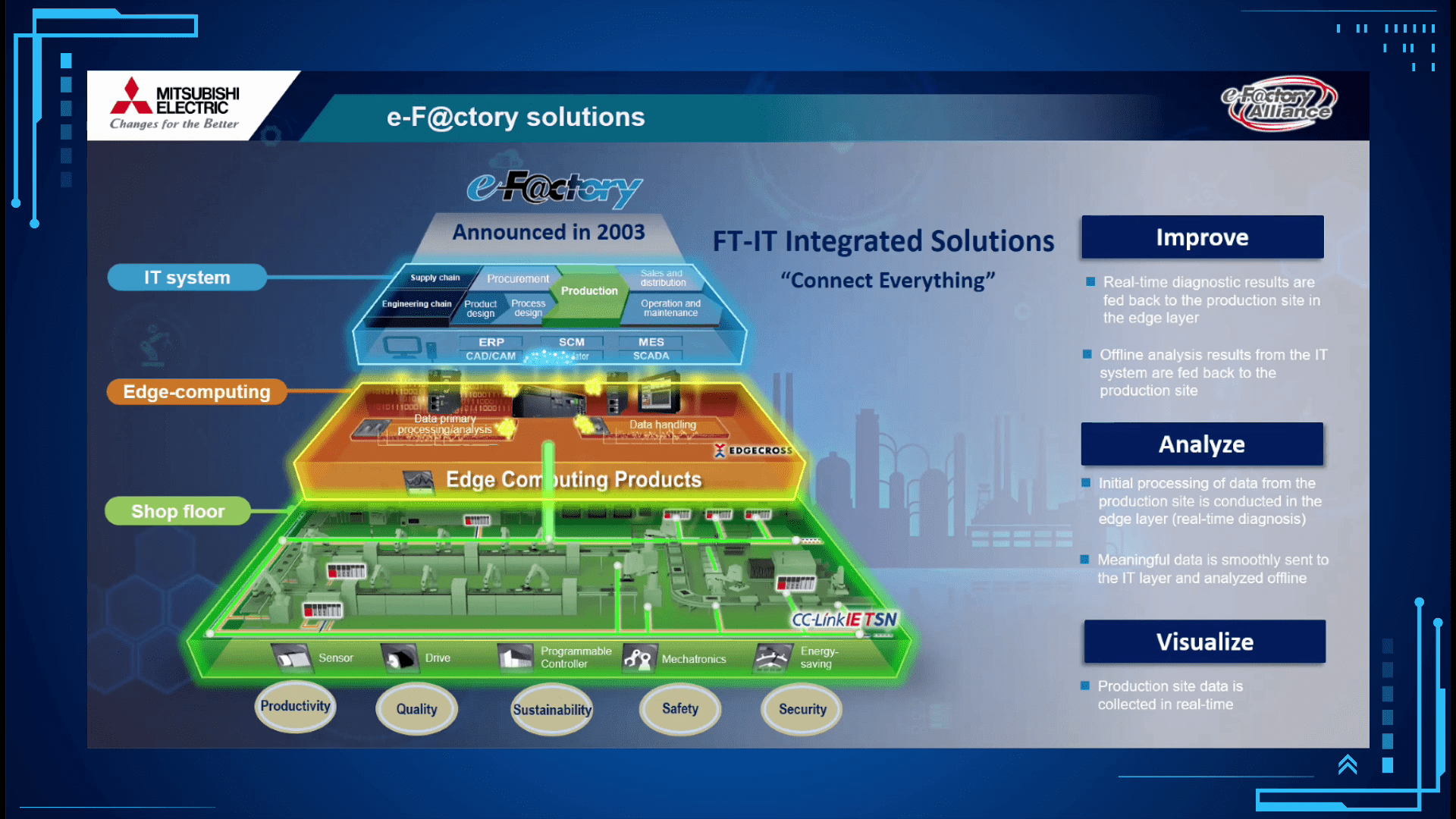 Mr. Bovon Thiansawat, Alliance and Project Development Group Leader gave an overview of supporting the industry in adopting technology to improve production processes according to the e-F@ctory guidelines and the SMKL - Smart Manufacturing Kaizen Level principles through collaboration with partners in and out of abroad in the ecosystem. "Mitsubishi Electric and the e-F@ctory Alliance have joined together as consultants to bring solutions to be used appropriately and worth the investment. Currently, more than 900 companies have joined the e-F@ctory Alliance to develop products and solutions. Solutions have been implemented in more than 140 countries around the world. In Thailand, we initiated the e-F@ctory Alliance project in 2019. Currently, there are over 58 alliance companies covering all industries. In order to be able to meet the needs of entrepreneurs who need to develop the production process to Industry 4.0. By the e-F@ctory Alliance project, we have divided the alliance into 3 main groups which are Software Partner, Device Partner and System Integration Partner. we share technology, knowledge, and develop solutions together to introduce to industry. We also have Education Partners, both public and private sectors, to participate in the development of entrepreneurs' personnel. This is an important part in raising the level of knowledge and understanding in applying technology which is the core of e-F@ctory + SMKL (Smart Manufacturing Kaizen Level)"

Mitsubishi Electric is currently working with a partner in e-F@ctory's alliance to develop solutions and the most of solutions are ready to implement, for example, 5G Remote Solution, Automated Mobile Robot (AMR), Automated Storage and Retrieval System (AS/RS), or connecting IT systems to OT with Cyber ​​Security. There are also factories partner that develop production according to the e-F@ctory and SMKL (Smart Manufacturing Kaizen Level) guidelines by deploying solutions from the alliance (e-F@ctory Alliance) in Thailand such as CPF (Thailand), Siam Compressor Industry Company Limited and Yawata (Thailand) Company Limited, etc., which are ready for entrepreneurs in various industries to visit the factory and share their experiences in applying them.

Receive the latest headlines, right to your inbox