Total system performance, not individual component specifications leads to maximum performance - Based on this view, the MELSEC iQ-R series servo system controllers offer you an ideal solution to maximize your system productivity. 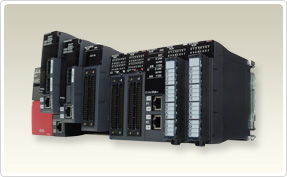 Select the most suitable combination of CPU engines that can reduce cost and maximize machine performance to the fullest from our extensive product line. Efficiency in designing and debugging is also improved.

Experience Powerful Performance of Multiple CPU with Ease of Use Just Like Using One CPU
You can select either the Motion CPU or the PLC CPU based on the application, allowing you to configure a system more flexibly.
The easy-to-understand flowchart form is adopted by Motion SFC for Motion control programming.
Also, the direct positioning start instruction allows you to program Motion control, such as positioning and synchronous controls, just with sequence programs.

Ease of Use Achieved by a State-of-art CPU Buffer MemoryRevolutionary
The high-speed, high-capacity CPU buffer memory revolutionizes the data exchange between CPUs.
The PLC CPU and the Motion CPU each have a CPU buffer memory. And those buffer memories are efficiently utilized for two different purposes.

Example of using PLC CPU buffer memory
Bulky data such as cam data can be transferred by just a one-time transmission through the 512 k word buffer memory.

Example of using Motion CPU buffer memory
The data that is set on Motion CPU side can be reflected to the interlock in the sequence program without any delay.

Data can be transmitted every 0.222 ms between the PLC CPU and the Motion CPU. The CPU buffer memories (fixed-cycle communication area) are synchronized to the Motion control, optimizing the operation.

Flowchart description is easy to

·         The machine operation procedure is visualized in the program by using the flowchart descriptions.

·         A process control program can be created easily, and control details can be visualized.

·         Servo control, I/O control, and operation commands can be combined in the Motion SFC program.

·         Motion SFC program can execute servo control by itself, eliminating the need of creating the sequence program for servo control.

§  Communications speed is increased to 150 Mbps full duplex (equivalent to 300 Mbps half duplex), three times faster than the conventional speed.

§  Smooth control of a machine is possible using high-speed serial communications with a cycle time of 0.222 ms.

A variety of positioning controls, such as PTP control, position follow-up, and continuous trajectory control are available with the Motion controller.

·         Positioning operation can be activated by Motion SFC, or the direct positioning start instruction by the PLC CPU, etc.

All axes are synchronized using a synchronous encoder axis or a servo input axis.

A large system can be configured thanks to the advanced synchronous control that allows up to 192-axis synchronization with high accuracy by use of three Motion CPU modules. ·    The synchronous control is easily executed just by setting parameters.

·    One of the following three can be set as the input axis: Synchronous encoder axis, Command generation axis, or Servo input axis.

·    "Command generation axis" is not counted as a control axis; therefore all the control axes can be used as output axes.

·    The cam axis can be operated in linear operation (a rotary table, a ball screw, etc.), two-way operation, or feed operation by setting cam No. and cam data.

The machine is controlled so that the pressure commands match the pressure sensor values; therefore pressure is maintained constant even with a changing load. Each pressure process ("Feed", "Pressure maintaining", and "Pressure release") can be set with the Pressure Profile, and those processes can be tested on MELSOFT MT Works2, which makes a changeover and adjustment easy.

This Motion controller controls the simple industrial robot by installing the machine library.
The control method of the robots is a machine control which controls in a three dimensional (XYZ) Cartesian coordinates space.

The MR-MV200 optical hub unit can branch a single SSCNETIII/H network line in three separate directions. This enables distribution of the SSCNETIII/H compatible devices with flexible wiring arrangement. In addition, the distributed amplifier can be partly OFF for maintenance without stopping the whole system; thus, the machine availability can be improved.

·         The SSCNET connect/disconnect function of the controller allows you to power off only the desired servo amplifiers.

·         The optical hub unit is introduced just by making some changes in wiring without making any new settings. (Note): Be sure to confirm that "SSCNETIII/H" is selected in the system setting when introducing the optical hub unit.

The R16MTCPU, R32MTCPU and R64MTCPU Motion CPUs for the iQ-R Platform provide industry-leading performance for the most demanding motion applications for the Food and Beverage, Packaging, Automotive, and Printing industries. These motion CPUs use standard I/O modules for incremental encoders and high speed inputs, so no special hardware options are required. Serial absolute synchronous encoders are connected through the MR-J4-B-RJ servo drive.