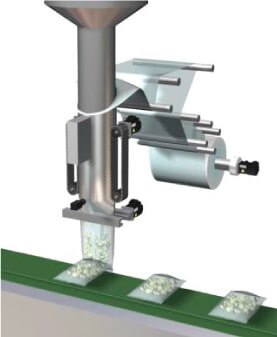 This machine feeds a packaging film roll vertically and forms a bag. After putting food in the bag, it seals and cuts the top of the bag.

Vertical sealing, film feeding, and horizontal sealing are mechanically interlocked and synchronized. Processes other than filling are performed by intermittent feed operation using a servo amplifier and a servo motor

Each process of filling, film feeding/vertical sealing, and horizontal sealing/film cutting are driven by different servo amplifiers and motors. Since the motion in each process can be flexibly changed by changing the cam pattern of simple motion, small-lot production of various products can be efficiently performed. In addition, program development efficiency can be improved by using the FBs of iQ Monozukuri PACKAGING.

By using the MES interface module in addition to the MIDDLE system, data in each process can be collected and managed in real time to realize IoT application in factories.